After the Japanese bombed Pearl Harbor, the U.S. Army Air Forces organized the Ground Observer Corps (GOC), a civil defense program to protect the U.S. territory against air attacks. There were dangerous unavoidable limitations in the radar system during that time as it was largely ineffective for the area below 5,000 feet, known as the “dangerous mile.” During the Second World War, the GOC filter centers and observation posts were only in northern and coastal states. 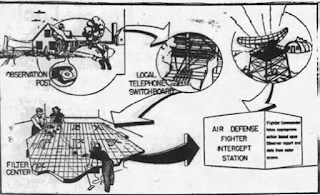 Volunteer observers received intensive training on identifying enemy planes and properly reporting their observations to their assigned filter center, where plotters would mark the aircraft on a filter board – a large-scale map of the area. Overlooking the filter boards were tellers with direct communication with an Air Force Ground Control Interceptor base to report the observation. If an unauthorized aircraft was spotted, the Ground Control Interceptor base would put pursuit planes into the air to meet any enemy attacks.

The GOC was dissolved at the end of WWII but was reorganized during the Cold War in early 1950, about six months after the Soviet Union detonated its first nuclear bomb in 1949. First, they revived old GOC filter centers and observation posts in the northern and coastal sta
tes. By 1952, the GOC response was so strong that Operation Skywatch was initiated to integrate the program into the Air Defense system 24 hours a day. 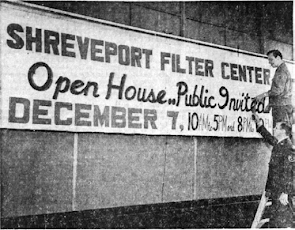 The Air Force warned that Russia might launch an attack via the Gulf of Mexico and called the south “the soft underbelly of the United States.” Plans to expand Operation Skywatch to all 48 states began, and by the fall of 1954, plans to open GOC filter centers in New Orleans and Shreveport was underway. The Air Defense Command leased the building at 531 East Kings Highway to house the Shreveport Air Filter Center. The center’s open house and dedication took place on Dec. 7, 1955, the same day that Mayor Gardner, Shreveport, and Mayor Burgess E. McCranie, Bossier City, proclaimed as Ground Observer Corps day. 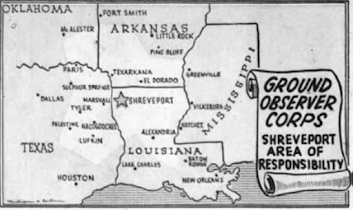 Volunteer opportunities were open to anyone sixteen or older, though historical records reveal that children as young as seven participated. Approximately 75 percent of the volunteers in the GOC were housewives. Many Bossier Parish residents in each community volunteered. In Benton, Mrs. Ford E. Stinson served as post supervisor, Mrs. D.E. Cummings was the chief observer, and Mrs. A.N. Knotts assisted in recruiting volunteers. Mrs. Vara Farrington was the chief observer for the Carterville area. In Plain Dealing, Leon Sanders was the post supervisor assisted by Mrs. Aus Barr and Mrs. Ardis Manry. 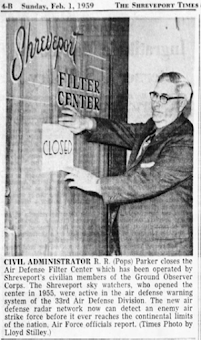 At the end of 1958, the announcement came that the Ground Observer Corps would disband on Jan. 31, 1959. Col. John T. Fitzwater, commander of the 33rd Air Division, told GOC members at a local awards banquet, “Deactivation of the Ground Observer Corps is not the end, but marks the beginning of a new national defense network. With emphasis on speed, machines can now process data faster and more efficiently that [sic] it can be done manually.”

The GOC disbanded because of a new network of air defense radar stations known as the Distant Early Warning Line or Dew line controlled by the new Semi Automatic Ground Environment (SAGE) computer system. The new radar system could detect an enemy air strike force before it ever reached the nation’s continental limits. Every volunteer who earned their GOC wings was presented with a wallet ID card and a certificate from the USAF recognizing them as an honorary life member of the Air Defense Team for voluntary and faithful service in the Ground Observer Corps.